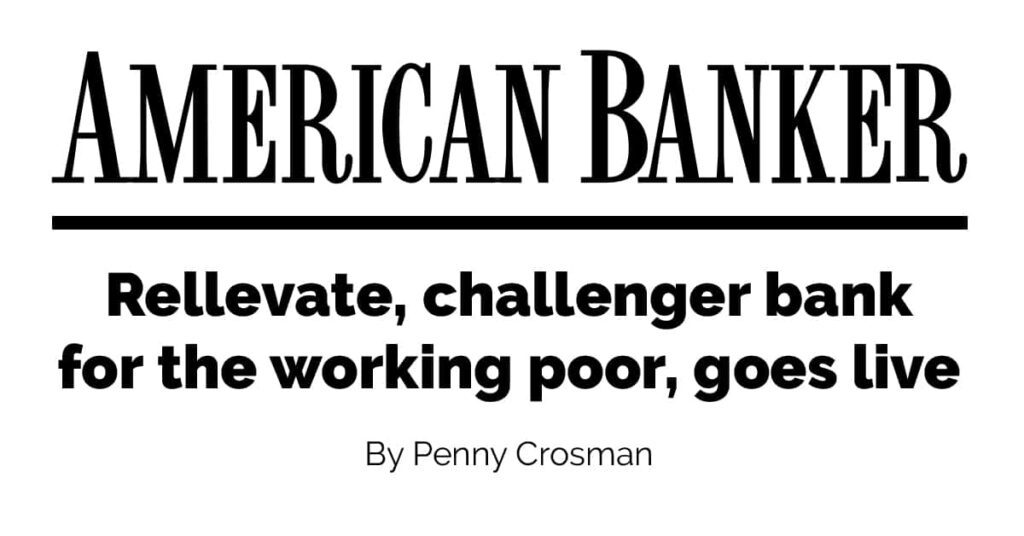 Fintech companies are taking on a glaring problem in America that the coronavirus pandemic has made worse — the struggle of the working poor. Millions of Americans have full-time jobs but still can’t make ends meet.

This is the market targeted by Rellevate, a challenger bank that launched on Thursday. More on its story in a moment. First, here is additional context about the problem and emerging solutions for it.

Stewart Stockdale (far left), chairman and CEO of Rellevate, explains the challenger bank’s offering to hotel workers in New York. “We’re not doing overdraft because I think that’s a dirty word in the world of banking,” he said in an interview.

Even before the current public health crisis, the working poor faced mounting challenges. The issue was brought to light with dramatic flair during a congressional hearing last year when Rep. Katie Porter, D-Calif., told the story of a single mother who works as a JPMorgan Chase teller. After rent on a one-bedroom apartment (where she and her daughter share a room), utilities, car expenses, food and child care, the teller was $567 in the red at the end of each month, Porter said.

“How should she manage this budget shortfall while she is working full time at your bank?” Porter asked JPMorgan CEO Jamie Dimon, who was one of the bank CEOs on the witness panel that day.

“I don’t know. I’d have to think about that,” answered Dimon, whose total compensation in 2019 was valued at $31.5 million. JPMorgan tellers make $15 an hour, which equates to about $31,200 per year, according to Glassdoor.

Now the pandemic is making life even harder for this segment of the labor force.

According to a Pew Research Center study issued in April, 52% of lower-income adults say they or someone in their household have lost a job or suffered a pay cut as a result of the pandemic.

Rellevate has taken the idea of letting people draw from their next paycheck and kicked it up a notch. It also wraps in other useful features like bill pay and international payments, along with a basic checking account and debit card.

The company and its offering are the brainchild of co-founders Stewart Stockdale and Greg Schneider, who previously worked at companies like Conseco, a provider of insurance and lending products for people with $25,000 to $75,000 in annual income, and the money-services company Western Union, which interacts with check cashers and payday lenders.

Stockdale, who is president and CEO of Rellevate, was formerly president of Western Union and held senior roles at Mastercard and American Express.

“We’ve been in and around middle- and lower-income America and we said, if we were to build the right company with the right products for this population, what would that look like?” Stockdale said.

“Unlike most-early stage fintechs, Rellevate has an extremely experienced, world-class management team that has been able to attract best-in-class platform partners right out of the gate,” said Mark Parsells, founder and managing general partner of Montpelier Ventures, who is also Rellevate’s first independent director.

The crux of Rellevate’s offering is its Pay Any-Day advances. These are not payday loans. They’re also a bit different from other early wage access providers like PayActiv, DailyPay and Branch, in that they can be for larger amounts and don’t carry direct fees — though there is a monthly fee for the overall account.

At any time in a two-week pay cycle, Rellevate customers can request up to half the next two weeks’ pay and have that money transferred into their account right away. They can do this up to four times a month.

Customers have to have their paychecks deposited in the Rellevate account and employers have to provide Rellevate with time and attendance data for this to work. Rellevate pays itself back when the next paycheck comes in. It has no recourse if the money never appears. The challenger bank Chime uses the same method to let customers that meet its risk criteria overdraw up to $100 a month.

Without something like this, hourly workers living paycheck to paycheck typically are forced to go to a payday lender, a pawnshop or a friend or family member, or dip into their 401(k). Otherwise, they often face embarrassment.

“If you’re at the point of sale at the grocery store with 15 items, and you swipe your card and it says insufficient funds, you’ve got the walk of shame where you have to put everything back,” Stockdale said.

In such a case, Rellevate will send the user a message saying, you’re going to get declined for this transaction, would you like us to move money from your Pay Any-Day account? If the customer taps “yes,” the money is transferred in real time.

“It serves as an emergency fund,” Stockdale said. “We’re not doing overdraft, because I think that’s a dirty word in the world of banking, and I think it’s completely unreasonable to charge somebody $35 for an overdraft.”

Pay Any-Day also works with bill payment. This is something other challenger banks don’t do. A customer who is paying bills through the app can ask to be alerted anywhere from two to 30 days before a bill comes due. Rellevate predicts what the state of the customer’s account balance is likely to be at that point.

“The power of this is we know we’re coming to take money out of the customer’s account at 6 p.m. on the 30th of the month,” Schneider said. “If you don’t have the money in your bank account, we’re going to send you a text message and an email saying, your bill for Verizon is due today, it’s $75 and you’ve only got $25 in your bank account. Do you want us to move money over? You have until 5:59 p.m. to say yes.” If the customer taps yes, money is immediately moved over from the Pay Any-Day account to the demand deposit account.

Rellevate charges a $9.95 overall monthly account fee. That encompasses the demand deposit account, which can be accessed through a smartphone or PC; a Visa debit card; bill pay; global money transfers; and two ATM transactions per month within the Allpoint network. The banking services and debit card are provided by Sutton Bank in Attica, Ohio.

That $9.95 might sound high for people who are living on the financial edge. But Stockdale said that many U.S. banks charge $10 to $25 per month unless a certain amount is held in deposit. Some charge $35 for overdrafts. Payday lenders typically charge in excess of 150% interest. Check cashiers charge a large percent of the face value of a check. Earned wage access players charge between $2.95 and $14.95.

Rellevate’s launch was delayed by the COVID-19 pandemic. One developer got coronavirus; he’s since made a complete recovery. A few partners put the brakes on the project and didn’t want to launch in the early days of the outbreak. The company’s partners include Visa, the cloud-based core banking software provider Technisys, the ATM network provider Allpoint, the payments company Payveris and the venture capital firm Accel.

Launching in the middle of a global health crisis that is crippling the economy was challenging. Yet in another sense, the timing was good, because the need became greater than ever.

Rellevate’s pitch to employers has changed since the inception of the company. When the team started building Rellevate, the labor market was tight and its message was, here’s a way to keep employees loyal and recruit top-notch candidates. Now the message is, here’s a way to help employees survive.

Rellevate, Inc., Completes Initial Capital Seed Round And Forms Board Of Directors

"Rellevate is helping to empower America's working class by enabling them to access, use and move their money... anytime, through fee-friendly products such as a digital account, bill pay, send money, gift/reward cards, and Pay Any-Day...that allows access to money they have earned without having to wait for payday."